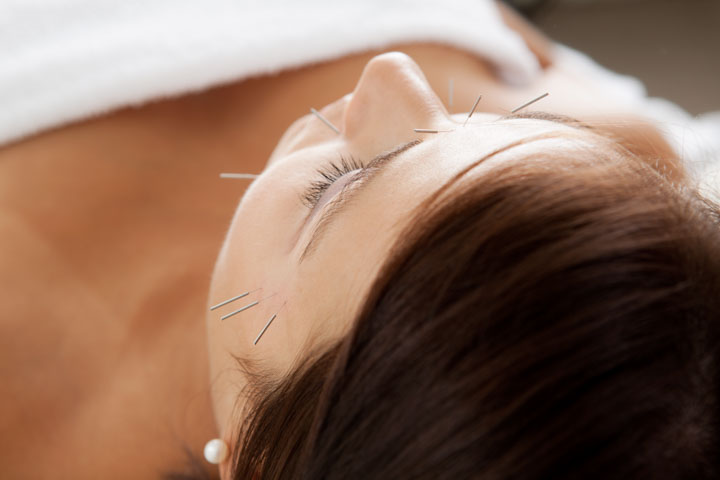 A total of 200 patients with acne were treated and evaluated in this study. The patients were diagnosed with acne between January 2008 and March 2010. The patients were randomly distributed into an acupuncture treatment group and a drug therapy control group, with 120 cases and 80 cases respectively.

The treatment protocol was as follows. Patients from the treatment group rested in a lateral position. A single-use needle of 1–1.5 inches was applied to each acupoint. All the acupoint sites were disinfected with 75% ethanol. When a deqi sensation was achieved for all acupoints, reducing manipulation was applied for excess signs. Subsequently, the tonification manipulation technique was applied for deficiency signs. The needle retention time was 30 minutes per acupuncture session. One session was conducted every other day for a total of 10 treatments. Four sessions, in total, were conducted on each patient in the treatment group. The primary acupoints selected for the patients were the following:

Effective treatments for acne is of great importance. Acne affects over 650 million people worldwide. Approximately 20% of those affected have moderate or severe cases. It is slightly more common in females than males (9.8% versus 9.0%). [3]

In TCM (Traditional Chinese Medicine), references to acne exist throughout the ancient literature. The Huangdi Neijing (The Yellow Emperor’s Classic of Medicine) says, “Acne is related to sweating. When a person after physical activities sweats and is attacked by cold wind, acne can be present.” [2] According to TCM principles, the disease is caused by three factors: heat, toxicity, and dampness. As a biomedical correlate, the TCM term for heat is similar to the biomedical definition of inflammation. If there is exuberant heat in the lungs and stomach, it will flood upward to the face and cause acne. If there is greasy and spicy food in the stomach, it can transform into heat and dampness — and sometimes toxicity.

ST25 (Tianshu) belongs to the stomach foot Yangming meridian and is also a Mu point of the large intestine. Needling this point reduces heat in the large intestine and lungs. SP10 (Xuehai) can also help to clear toxicity and heat. CV6 (Qihai), which literally means the sea of qi, can be used with tonification manipulation to activate qi and blood. LR3 (Taichong) is on the liver meridian. It is a Shu point as well as a Yuan point. Thus, the point contains abundant qi and blood. When reducing manipulation is used on the point, heat in the liver is significantly reduced. When there is no overabundance of heat in the liver and in the lungs, the skin problem can be cured. The foot Yangming stomach meridian travels over the face; needling points on the area can activate qi and blood, thereby helping the skin to dredge toxicity, heat, and dampness.

According to TCM principles, GV14 (Dazhui), BL13 (Feishu), and BL17 (Geshu) are effective for the treatment of inflammation. Cupping can be used on the acupoints to activate essence-qi in the Yang meridians, so that qi and blood circulation can be smoothed, and toxicity can be broken down.

The researcher suggests a comprehensive understanding of acupuncture treatment is of great importance. “Acupuncture cannot only regulate the meridian system. When a local area is needled, the activity of the follicle can also be regulated. The follicle produces less oil, and the lesion becomes easier to recover.” He adds that the combination of TCM external therapy with acupuncture provides optimal patient outcomes. “Acupuncture doesn’t lead to drug resistance like biomedicine, and it can be used along with other TCM therapies to strengthen the efficacy. Herbal facial masks are an example. They contain herbs that can activate qi and blood, and soften the mass and scars.”